I like to consider myself a sort of artist.

Unfortunately, people assume artists are just creating visual mediums, specifically through drawing or painting. That's not true at all! I see photographers, chefs, sculptors, musicians, poets, costume designers, video producers, dancers, game developers, and more as artists, as well. Art is the application of our creative skill and imagination, and it shouldn't be so narrowly limited. It's an insult to anyone who does anything creative to deny them of such a label.

This page is where I will be sharing some of my creations - photos of costumes, ZIPs of games, and more. However, it's unlikely I'll actually have everything I make linked here, and it's also unlikely that I'll even try. I expect this page to mainly show things I'm either extremely proud of, or things that would be difficult to share on other platforms (like games). As such, please understand if the content library here is small, inconsistent in medium, seldom updated, and so on. It's not meant to be updated often, just to show off things that I feel deserve it.

I worked on this game for... quite a while. I can't really say how long, but I have 4,648.6 hours on the engine as of writing this -- and this project is the only thing I ever actually made in the engine. 4,648.6 hours honestly sounds about right to me. There's a lot of unused content in here, and the game was never finished. I stopped production due to changes in my life, alongside losing contact with the artist and simply burning myself out. While I'd love to resume work on it eventually, I feel like my energy is best spent towards something original. This game is a mix of Guild Wars 2 lore and Fire Emblem-inspired gameplay, and while most of the characters are original to me, there were a couple that were written by friends of mine. Be warned that this game was never fully tested, though it certainly should not be unbeatable - but it may still prove diffiult. Click here to download the game from mega.nz 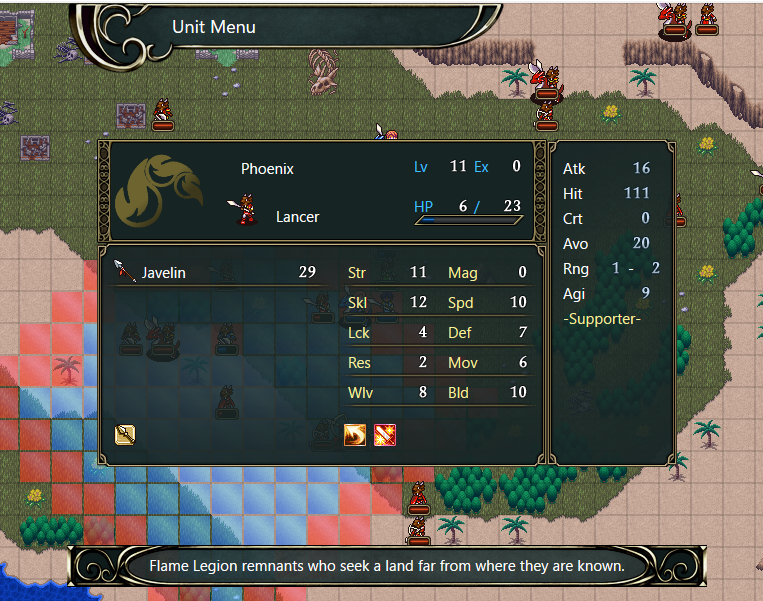 When I first saw a GifyPet on someone else's page, I thought it was the coolest thing. A game that was done entirely with HTML, CSS, and JavaScript? I wanted in on that! Besides, I had an original character - Noct - who I was trying (and failing) to figure out what to even do with. I loved the idea of him, but I was just drawing blanks. Sadly, I didn't like the noises or dialog in the GifyPet game, so I decided it was up to me to take the files for it, and rebuild the game to fit his character. This was the results of a day of hard work, and I'm really proud of the results! 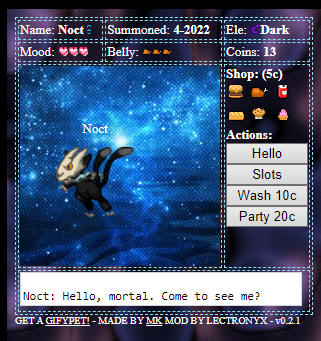 Website content is owned by LectroNyx, the one and only. Imitators best perish and despair. This page was last updated Apr 6, 2022